The Court Historian is published three times a year, in April, August and December. Information about past issues is available here.

Courts cannot be understood without hunting as hunting cannot be understood without courts. Hunting was a pleasure, a way of gathering game for the royal table, a demonstration of power and a training in horsemanship and warfare. The proximity of hunting forests was a reason for the choice of Windsor and Versailles as royal residences. Royal hunts affected landscapes, animal breeding, music, costume, personalities, and, as John Christianson writes, ‘the entire balance between the natural and human worlds’. That is why this issue of The Court Historian is dedicated to them.

ARTICLES
Glenn Richardson - Hunting at the Courts of Francis I and Henry VIII
Simon Adams - ‘The Queenes Majestie ... is now become a great huntress’: Elizabeth I and the Chase
John Robert Christianson - The Hunt of Frederik II of Denmark: Structures and Rituals
Jane Ridley - ‘The Sport of Kings’: Shooting and the Court of Edward VII 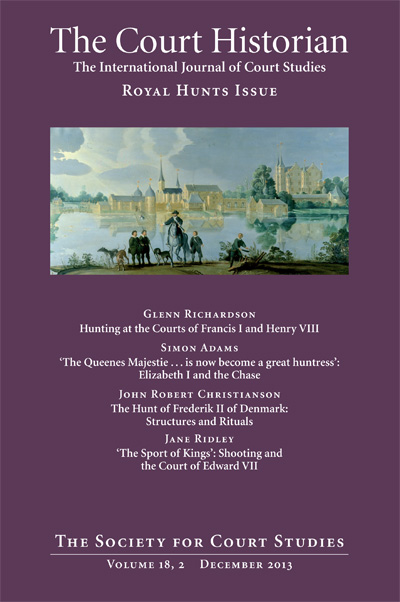